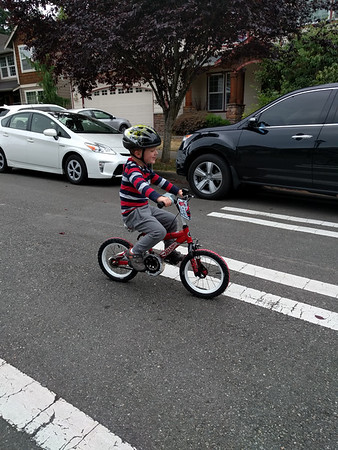 Cooper did it! He is now riding on two wheels! The small hill outside our house is exactly the slope he needs to even get started on his own. We had purchased a bike for him, but it was too big so we had to add training wheels after he moved to it from the balance bike. Having to add in the training wheel step was a small setback, but with lots of encouragement Cooper was willing to try a two wheel bike. We saw this in-between sized bike in the neighbors garage and asked if we could try it out. They let us and it worked, Cooper took to bike riding like a champ. They even let us keep the bike since we were moving in just a couple of weeks so he has it to keep practicing on. Like I said we have incredible neighbors!