Development: Consistently lines up to slide down the stairs feet first. Use a walker to make 10+ laps at a time around our house including controlling it to avoid obstacles and get unstuck. Loves to flip over during diaper changes. Nicholas has the best belly laugh and Cooper is an expert at getting him to do it. For a few weeks now, Nicholas will surprise us with his random bear crawls. Bear crawl = crawling on his hands and feet, but not his knees. He will take 1-5 steps like this before going back to his standard crawl. 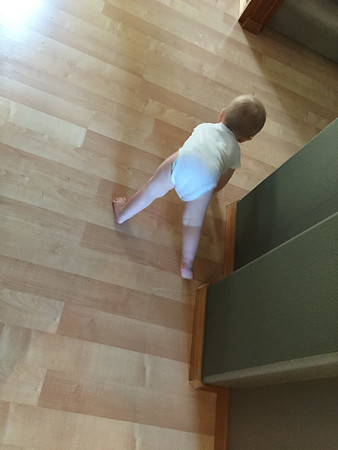 Speaking of crawling, this kid loves hard surfaces. If we are playing in the grass he will beeline for the pavement and then take off crawling on it. He is continuing the stage of putting everything in his mouth. He does give an adorable “who me” smile when you remind him “not in your mouth.” Physical: Tooth #10, a bottom molar, is finally through. The top two molars are showing 1-3 of the points, but still not through yet. Nicholas has been working on these molars for a very long time. It was one of the many reasons, back in April, we opted to turnaround on our Arizona trip. Eating: Nicholas loves most food and leans in the savory vs. sweet direction. Whenever Daddy opens a beer Nicholas gets so excited and LOVES to take a “sip” from the bottle or can edge. It was one of those activities that was funny at first, but now Nicholas insists on getting that sip. For breakfast he feeds himself a full yogurt and some fruit. Lunch is a half of peanut butter sandwich and fruit. Dinner is the lightest meal and is just a smaller portion of what we have. Nicholas loves any carbs. This past week we dropped the midday nursing leaving just the morning and evening feedings now. He transitioned pretty easily and really enjoys the silly play time before afternoon nap that was once the nursing time. Sleeping: Morning nap will happen if we give him enough time. He could be fussy 20 minutes or more before falling asleep. It is typically during that nap that he poops. Afternoon nap is close to 2 hours most days with bedtime at 7. Mornings are starting early, 5:30am early. The benefit is that we are all up in plenty of time to wave goodbye to Daddy from the front porch as he heads to the bus stop.