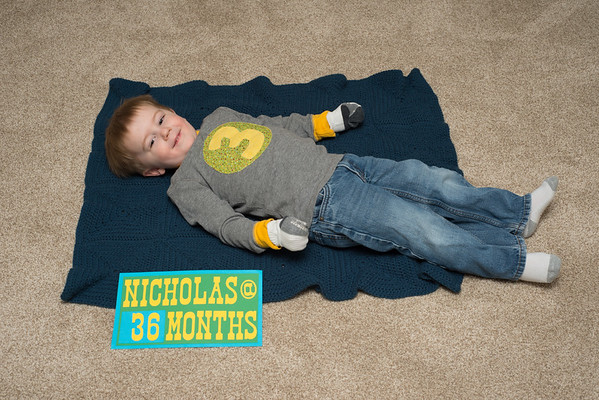 Stats: Weight 37lbs 6oz (93%), Height 37.91in (63%) Routine: Nicholas is our morning early bird. When he wakes up he lets the whole house know and he is ready to start his day right away. You will often find him jumping up and down in his crib when you open the door. This is especially true if he made it all the way until his clock turned green at 6:20am which he gets SO excited about. Most days he is awake before the clock, closer to 5:30. We have been trying to take him to go potty then put him back in bed with semi success. We have recently discovered if he comes back in bed with us he is a bit more likely to fall back to sleep. His first words in the morning are “eat.” As we get ready (our alarm goes off at 5:30 with a goal to be heading downstairs at 6:20) he constantly reminds us to stay on task so he can “eeeeeat”. Nicholas has school 3 days a week between Kindering and Toddler Group and the other days we often run errands or play in the Woodinville area after dropping Cooper off at 8:35am. Lunch is around 11:30 with a nap for ~2 hours until 3 when we leave to get Cooper from school. We come home for some playing time before tv time at 5pm and dinner at 5:30pm. The boys and Rob head upstairs at 6:30 for bath followed by pjs, brush teeth and books by 7.

Meals: Nicholas loves to eat, snacks especially. Breakfast is yogurt, which he gets himself by dragging the stool to the fridge and will grab strawberry first, then blueberry, then peach and final cherry (but he requests “peach” yogurt everyday). Granola is the preferred topping on the yogurt which is served with fresh berries and dried prunes. Preferred snack is applesauce and a cheese stick. Lunch is typically pb&j, grapes and veggie straws. Dinner he loves all kinds of meat and especially shrimp. He is definitely leaning towards a savory vs. sweet preference, just like his dad. 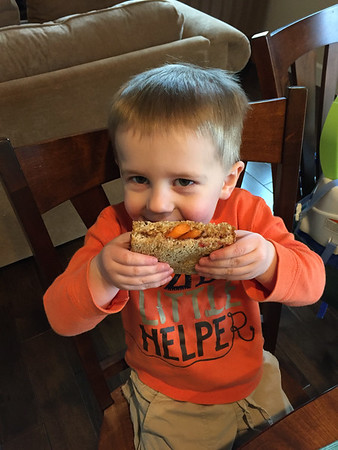 Making his own combination of a sandwich, adding carrots to his peanut butter and jelly. Development: Nicholas is such a delight to be around! We love him for his silly and sweet sides. He has aged out of his Kindering speech and physical therapy where he made great progress this past 1.5 years. When testing with the state program he qualified for speech and social/emotional development so he will be starting a new preschool next week at Rush Elementary along with a private speech therapist. Nicholas continues to be potty trained, but likes to throw in a reminder every month or so that he still can be distracted or determined when it comes to peeing. His favorite outside toy is his ride on fire truck and when using the balance bike he walks with it between his legs vs. sitting on the seat. Nicholas can take off his shoes, socks, pants and undies like a champ…getting them back on is not nearly as fun or a priority for him. When he gets really excited he gallops around in circles leading with his right foot. His run continues to be absolutely fantastic and guarantees a smile to anyone’s face who is privileged to see it. Words in frequency order: Eat, What?, What is that?, Why? the question words have the most amazing inflections. 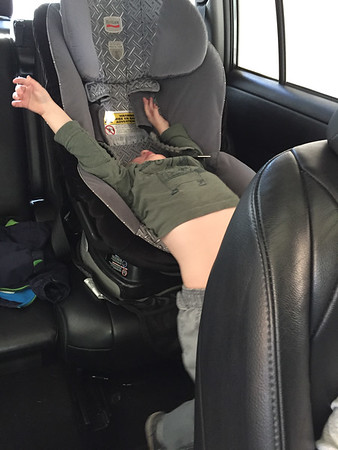 The milestone of flipping around his car seat in December at 2.75yrs old affords him the ability for some amazing dismounts when getting out of his car seat now. 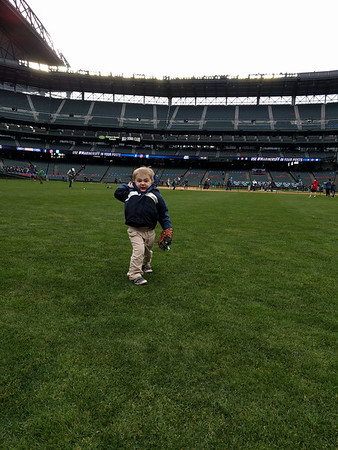 This boy is full of so many amazing expressions. He is a passionate kid and brings that to everything he does and we love him deeply for it. 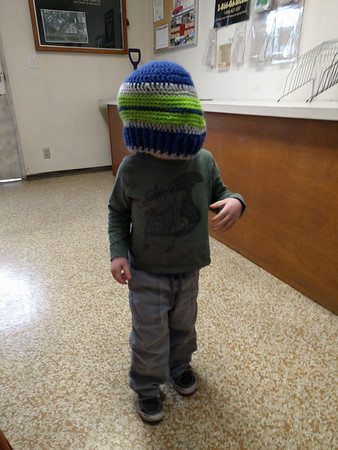 Nicholas is also incredibly silly. He loves to make people laugh and make himself laugh. He has the most amazing infectious giggle. 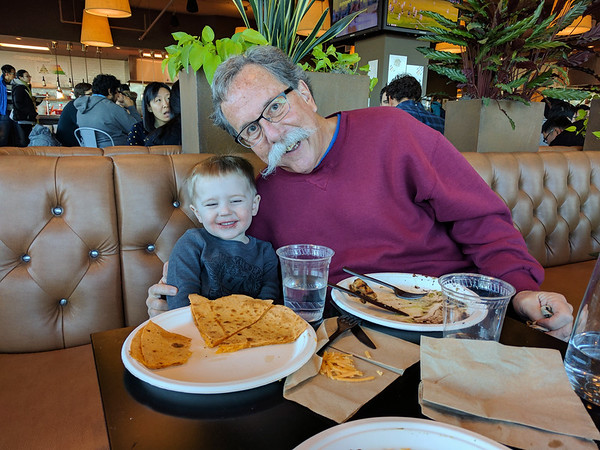 Nicholas loves his Grandpa. Nobody can get him running and as excited with a single knock on the door as much as Grandpa. They have so much fun together. Physical: Nicholas wears 3T clothes, size 9 shoes and 4t undies. Loves: Cooper, airplanes, construction vehicles, talking, singing, dancing, meat, pasta and being silly.

A rare chance to fly in the front seat with Daddy, while Mama and Cooper were traveling. Typically Cooper rides in front, but Nicholas is showing us he is ready, especially on the shorter local flights. 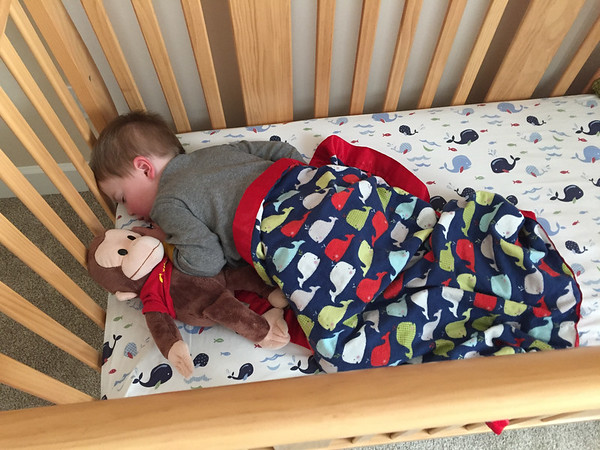 Last sleep as a 2 year old. Firsts: Tonight, the night of his 3rd birthday is his first time sleeping in a big boy bed. He was so excited and stayed in his bed until 4:45am and then went back to sleep until 6:40, a near record 🙂