Last weekend I flew down to the Nehalem Bay State Airport (3S7) to meet some friends for camping. 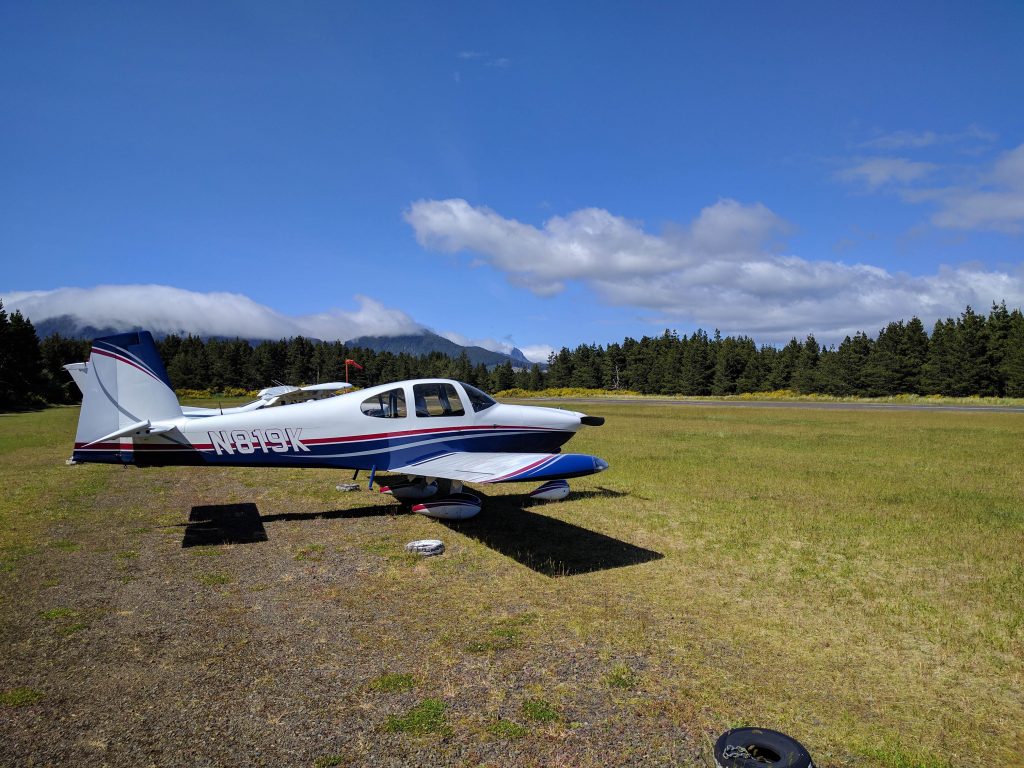 https://www.youtube.com/watch?v=rSoM_DpQgU4 It was tons of fun–more pictures here. Some bullet points to consider if you go down there:

See the map below. 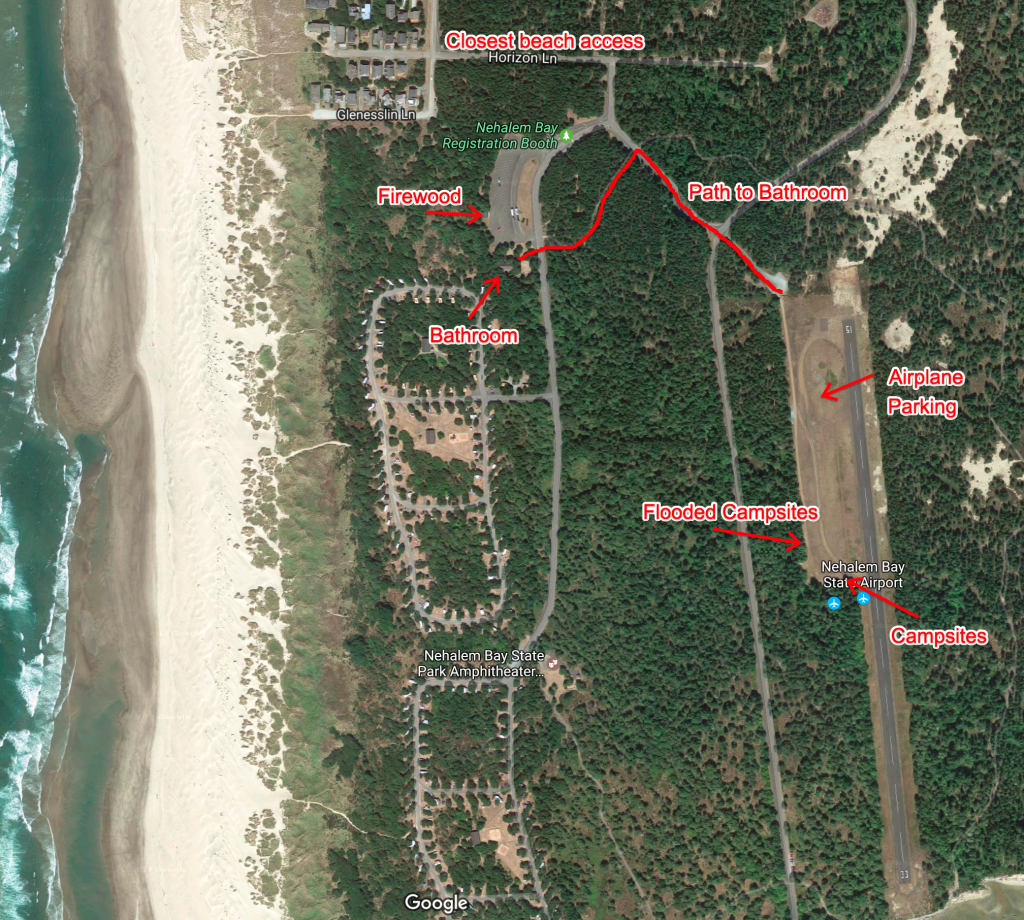 We did our 6th annual family flight to Jackson Hole. The weather was great, aside from a 1000′ overcast on the west side of the Cascades for our departure and similar weather on our return–yay instrument rating! We had some moderate turbulence again between Boise and Idaho Falls taking the direct route (just south of Sun Valley). From now on, I think we’ll swing down south, following the interstate and the Snake River, as there’s generally less turbulence. Here are some pictures.

In an earlier post, I described what I did to get Cooper rear-facing in the front seat. When it was time to flip him around, I continued to use the LATCH system to secure the seat. I also attached the top tether to the shoulder harness anchor on the ceiling. This worked well. Unfortunately, Cooper grew out of that seat, so we needed something new. Most of the booster seats appropriate for a 3-year-old have side-impact head protection, which is great for cars, but interferes with the headset. Fortunately, we found this one, which seems to work.

I should have posted this much earlier. When our younger son, Nicholas, started flying, we needed to move Cooper to the front seat, since Nicholas needed Kelly to take care of him. What I ended up doing works really well:

If you do this or something similar, remember that your primary job is to fly the airplane. I wouldn’t try this with a kid that needed constant attention. I posted this earlier on VAF.

Time for our 4th annual family flight to Jackson Hole! All the previous trips have been in good weather, so I suppose we were due for some challenges. This one was a great endorsement of an instrument rating, onboard weather radar, and thinking ahead. Our plan was to leave really early in the morning to avoid the afternoon turbulence that’s common in eastern Idaho and around the Tetons. It’s usually warm and sunny in Seattle this time of year, but it’s also common on those nice days to have morning fog, which can last until noon or even later. Because of that, I was hoping for a cloudy departure day, since clouds are usually fine for flying, but fog is not. Well, I suppose I got what I asked for. 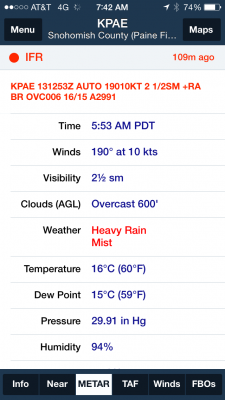 That’s not weather I’d want to spend much time in, but fortunately the bad weather extended only a few miles south of the airport. We took off in heavy rain, but 5 minutes later the weather had improved dramatically. 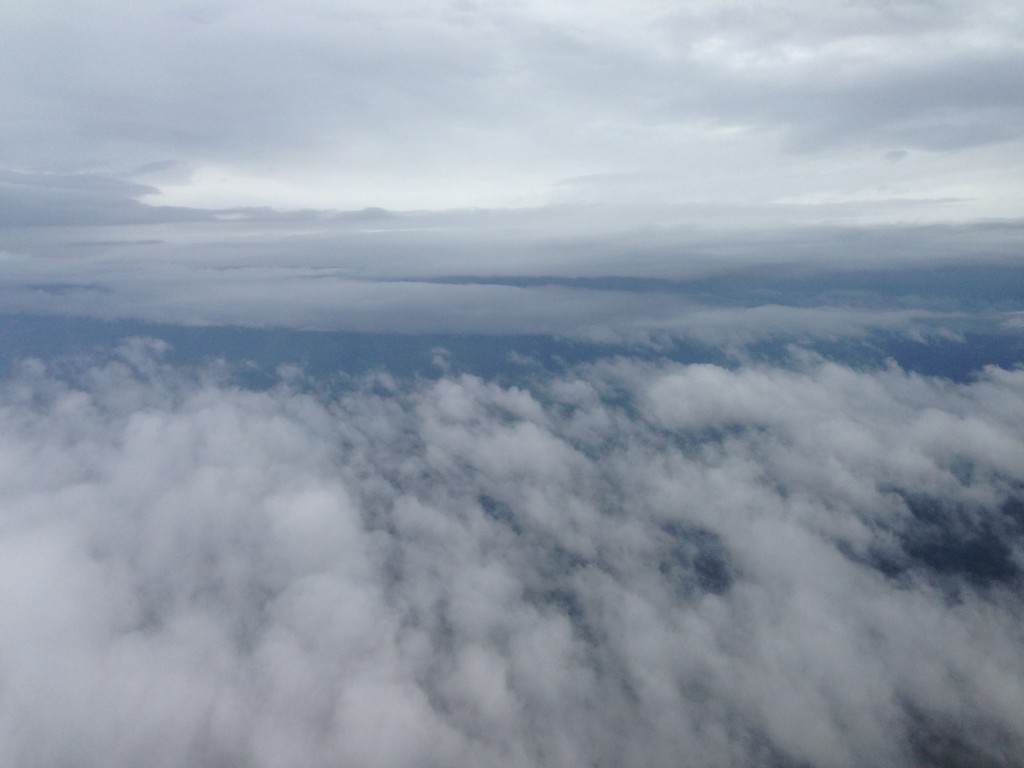 We were in and out of cloud layers until we broke out on top at about 8000′ (on our way to our filed altitude of 9000′). There was a fire TFR up to 10k’ over the cascades, so we had to go up to 11k’ for about 20 minutes. As we settled into the clear weather around Yakima, I checked the radar again and noticed there were thunderstorms approaching the Boise area. I decided we’d wait until we got closer to decide what to do, but it was a struggle not to focus on the radar, looking for changes. As we got closer, it became apparent we’d need a plan. 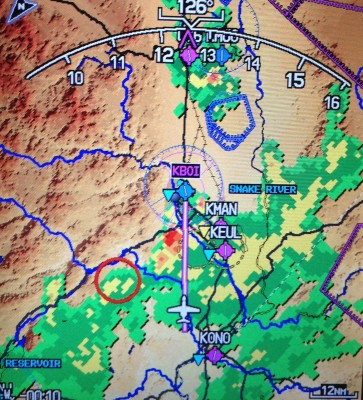 The weather was moving basically north (right to left in the picture above). Our original destination was Nampa (KMAN), but it looked like it was on the edge of the weather, so we thought about other options. We considered stopping slightly early at Ontario (KONO), but we knew we’d need to get through the weather for our second leg and figured it could be worse later. We considered sticking with Nampa, but even if we could get in, we could be stuck waiting on the ground for a while. We told approach that we wanted to change our destination to Boise (KBOI), thinking it was past most of the weather and was a bigger airport, so it would be easier to depart on an instrument flight plan later if needed. We asked for a deviation to get between the worst parts of the weather and to approach the airport from the east side. Once we got through the worst of it (heavy rain on both sides but could see ahead), we decided we wanted to get even further from the weather, so we canceled IFR and asked for flight following to Mountain Home, about 20 minutes further. Approach advised us of weather in that area, but we could see with our eyes (and the radar) that it was just about past Mountain Home at that point, so we decided to proceed. About 5 minutes out, we again decided to keep going, putting in another 20 minutes to get to Gooding (KGNG), an airport I knew to be a good stop. We actually landed there (and not Nampa, Ontario, Boise, or Mountain Home), about 3 hours after leaving Paine Field. Though there was a lot of weather around, we made sure we always had several “outs” (airports with good weather) and plenty of fuel. After a potty break, a quick lunch, and some fuel, we departed for Jackson in good weather. Unfortunately, another look at the radar showed more storms along our path. 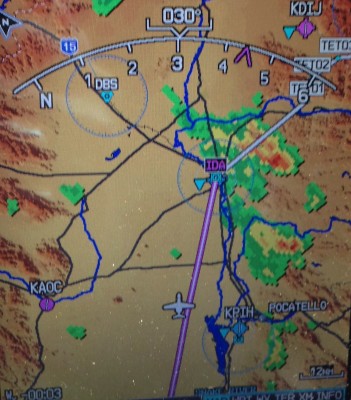 With plenty of space to the north of the storm, we were able to fly around it. I kept a distance of about 20 miles, and when I started to get a little too close, we could definitely feel the bumps. Going around meant we ended up about 10 miles north of Driggs, giving us a great view of the Idaho side of the Tetons. 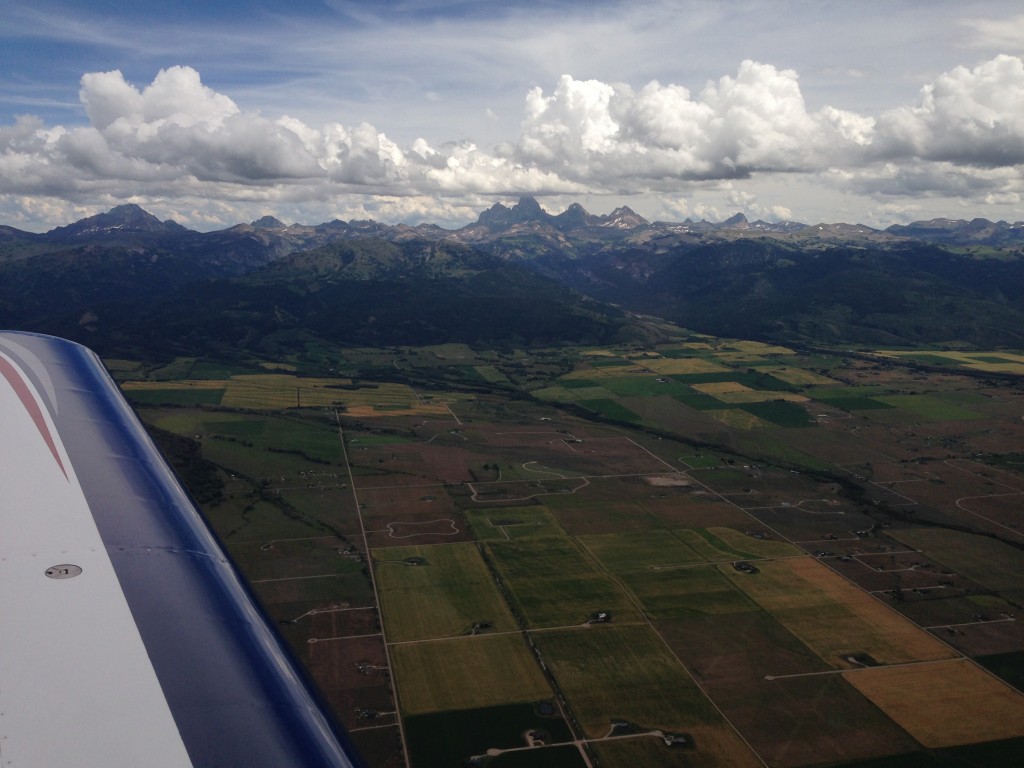 The good news was that winds away from the storm were fairly light, giving us the calmest flight yet through Teton Pass and into Jackson Hole. Everyone was happy, including Cooper, who was excited to see the family. 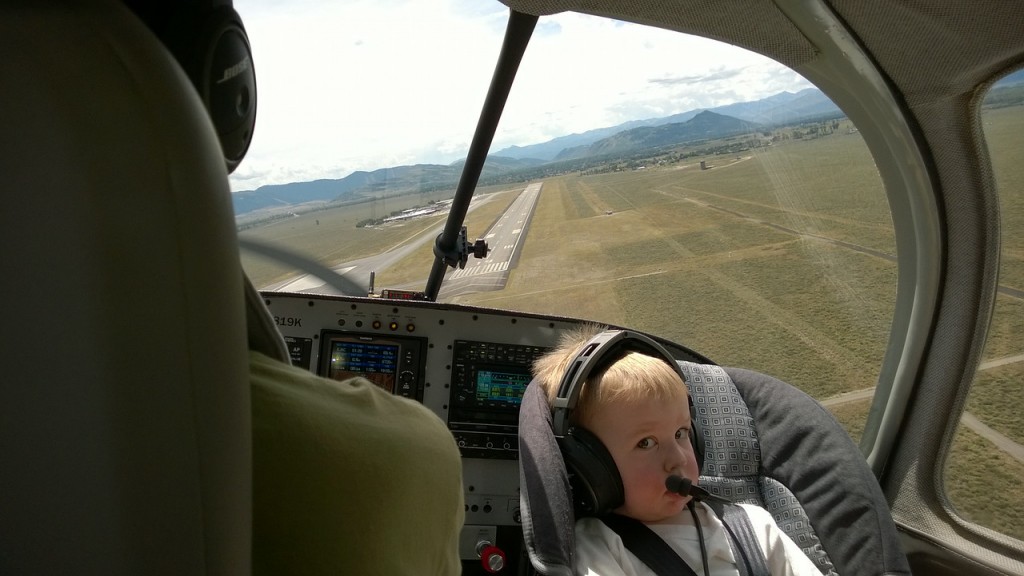 Though the flight was more involved than normal, it was a good experience. Here are a few more pictures. 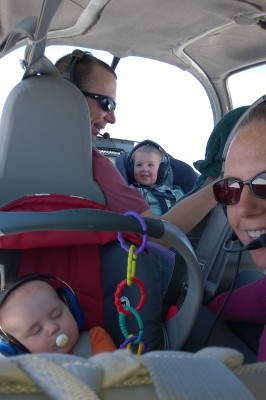 It’s been a long time since our last post. We’re still flying, though. A few things we’ve done since our big cross-country trip last year:

I’ve also been doing more IFR flying, cautiously working on getting my weather-flying confidence back to where it used to be. More posts to come!

We’re headed home! The trip has been great, but after a couple weeks, I think we’re all ready to be back at home. We had about an hour to head north before reaching the familiar central valley of Idaho. We headed north, staying east of the mountains to stay out of the Salt Lake Class B airspace. We’d intended to do a fuel stop at Nampa, Idaho (outside Boise), which we like, but Cooper was still sleeping as we approached, so we decided to keep going to Baker City.

Baker City was very nice, including full-serve fuel for the price of self-serve. We relaxed for a little bit, but our eagerness to get home meant we were ready to jump back in the airplane. The rest of the trip was very familiar from our trips to and from Jackson Hole. No clouds, until we approached Seattle (go figure!). The ceiling was high, so after a few minutes in the clouds and a visual approach, we were finally home. http://www.youtube.com/watch?v=Lr4xra3wuY0

We didn’t make it to the four corners area the night before, so we decided to depart Santa Fe, fly over four corners, then make our fuel stop in Moab (Canyonlands Airport). From there it’d be a short flight to Heber City, the closest airport to Park City.

We departed under mostly clear, though a little smoky, skies. The scenery started getting more and more interesting as our flight progressed. I was concerned about suitable emergency landing areas, but was pleasantly surprised that even away from main roads, there were tons of straight dirt roads.

We got to the four corners monument (which isn’t on the whole latitude/longitude lines as I’d expected). There’s really not much to it. Kelly and I were glad we didn’t drive the one hour each way to see it from the ground.

From here, the scenery got even better. The pictures really don’t do it justice–you need to be there to fully appreciate it. Canyonlands Airport in Moab was fairly busy. We landed and no one bothered to tell us where to park. Also, self-service fuel was inop, but fortunately we didn’t need any. Terminal was nice, though, so we took a break. Departing again, it was bumpy again, but we felt fine. The rest of the flight involved flying through the mountains south of Salt Lake, then upon reaching Provo, turn right to head northeast through a mountain pass to Heber City. This part of the flight was also beautiful and much different than the canyons.

http://www.youtube.com/watch?v=3kGGWitzf2Q The approach and landing in Heber City was amazing. On the ground, we ran into fellow RV-10 builder and pilot Sean Strasburg, who offered to help with a fuel smell issue we were experiencing (our fuel flow sender is leaking again–more on that in a later post). With the airplane tied down, we grabbed our rental car (which was driven to our airplane for us) and headed into town.

The night before in Austin, we decided to fly the next day to Farmington, NM and drive out to see four corners. By the time we left Austin, it was already getting hot. Heading out, I realized that despite being from Houston, this was my first time in northwest Texas. There’s not much to see aside from oil wells and the occasional town.

Our first stop was just across the New Mexico border, in Portales. It’s a quiet little airport with a decent pilot lounge and fairly cheap gas. Cooper decided to do some reading during the stop.

After a rest, we kept going. It was incredibly hot and bumpy, to the point that I started to not feel well, which was a first for me in this airplane. A headwind and the bumps made for slow progress, too. The scenery was nice, though.

With all the bumps and neither of us feeling great, we decided to cut the day short. We chose Santa Fe over Albuquerque, thinking that there was less chance we’d have another opportunity to visit the smaller of the two cities. Fires near Santa Fe made the airport incredibly busy.

We parked, tied down, unloaded, and got a ride to a hotel. Amazing luck: there was a brewery (Blue Corn Cafe) right next to our hotel! Cooper enjoyed the food, his first time eating off a kids’ menu.

That night, we decided a perfect way to end our trip would be to stay in Park City, Utah for two nights before heading home.